See first-hand the features that empower businesses
like Ice Jewellery to grow with BigCommerce. 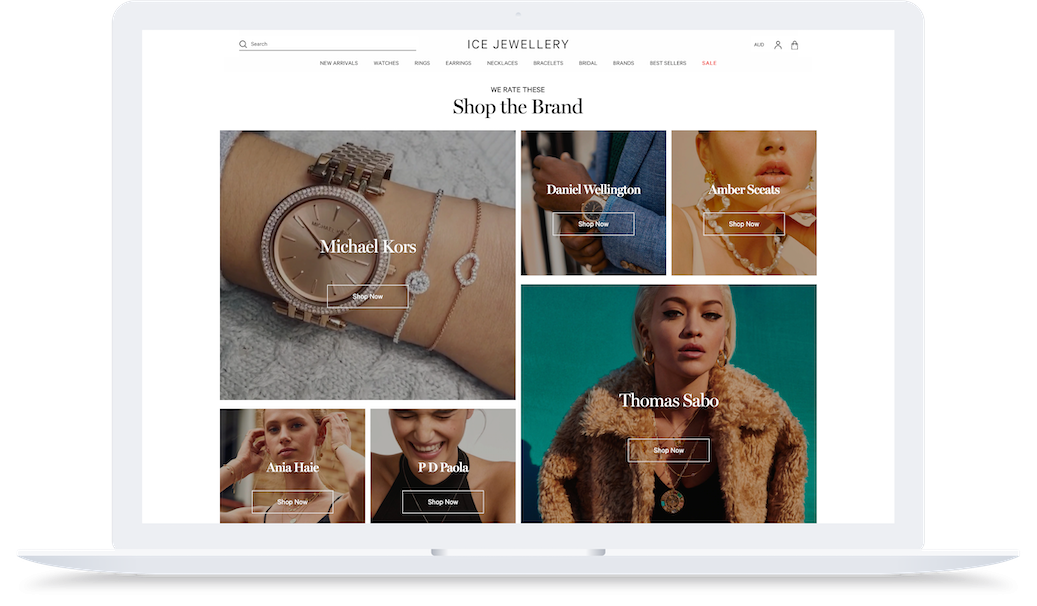 The Molnar family is no stranger to business. In 2012, brothers Simon and Nick founded Ice Jewellery, selling quality rings, watches, necklaces, earrings and bracelets by notable brands such as Bianc, Thomas Sabo, OOZOO Steel and P D PAOLA. But the family’s true start in business began in 1982 when the brothers’ parents opened St Michel Jewellers and ran that business for 35 years.

Growing up Simon and Nick worked in their parents’ brick-and-mortar store, so jewelry became second nature to them. While in high school Simon began selling jewelry by Pandora on eBay. It wasn’t long before Nick joined him, eventually taking over the eBay business. One thing led to another and the brothers went all-in, launching Ice Jewellery as a pure play online jewelry store.

Letting Go of Rigid Structure for Something Better

We were originally using eBay and Magento 1. For the most part, Nick owned the eBay side of the business and I managed the branded website. The old website was very structured; it was almost like a database. You would get to the website, there'd be a lot of text and it would take you where you wanted to go, but it didn't provide the best customer experience.

I wanted the website to do two things for our customers. The first was to get people who knew what they were looking to buy to that product as quickly as possible. The second thing was to create the kind of site experience that allowed people who wanted to linger and browse the ability to do that.

About six months before we migrated to a new platform our old one was just falling over. People were having trouble adding items to the cart. Some experienced problems with processing their payments. We were losing out on real sales opportunities.

We’d been on Magento from the start, 2012-2020. At the end, anyone could see that it was old and outdated. The design was outdated too. It was built eight years ago by myself and my brother. We are quite structured men so what we had didn't really lend itself to the ecommerce world of today.

We planned to do a complete rebuild, and Magento’s end of support just fast-tracked things for us a bit. Turns out it was the best thing that could have happened to us.

Not Willing to Compromise

It’s really important for us to have the flexibility to do all the things we need to do. On the surface Ice Jewellery seems quite simple, but behind the scenes it is quite complicated.

We didn't have deep pockets at the beginning. We had to operate in a way where we could spend little and get as much of a return as possible. And part of that was SEO. I taught myself how to rank on Google, rolled out an SEO strategy and saw the value of a really concise URL structure. I wasn't prepared to compromise on that, so that was a big criteria for our new platform.

A second criteria was the ability to automatically merchandise categories by best sellers. I needed to know that as customers found products they liked, they would naturally rise to the top of the category. This is in stark contrast to when we were on Magento. We would launch a new product, it would perform really well and then I would find that it was actually at the bottom of every category it sat in. Merchandising categories was big for me.

Another thing about Magento: we had to manually rank every product in every category. Essentially, we had to say which products were at the top and which products were at the bottom — and if new products were added to that category, it became really tough. We have a 20,000+ SKU catalog and some of our categories were a few thousand products. So, to merchandise an 8,000 product category is impossible. Plus from an SEO perspective, it meant we had over 400 categories. To do that across the board just wasn't possible.

“In comparing Shopify to BigCommerce, I realized pretty quick that with Shopify you mold more to them. Whereas with BigCommerce, it molds more to us.”

I'd actually heard about BigCommerce from a few other Magento retailers that were going through the same process as us. It seemed like we were all weighing up the same three platforms: Magento, BigCommerce and Shopify.

We felt Magento 2 was not as complete a platform and quickly ruled them out. In comparing Shopify to BigCommerce, I realized pretty quick that with Shopify you mold more to them. Whereas with BigCommerce, it molds more to us.

Our agency, Moustache Republic, also recommended BigCommerce, letting us know it provided the flexibility we needed. That was good news for us to hear.

What helped seal the deal for selecting BigCommerce was learning the company was founded by Australians. It just added kind of an Australian background to it. Their story is similar to ours and I just felt synergy with BigCommerce.

The Metrics that Matter to Us

I split ecommerce into four key metrics: acquisition (getting people to come to the site), average order value, customer retention and conversions. We were always strong in three out of the four, but we kept falling short with converting new shoppers into buyers.

Prior to BigCommerce our conversion issues stemmed from how our store was built, how it looked, and how often system bugs and snafus hindered internal operations and user experience. Having our mobile site on a separate domain than the desktop website didn’t help matters either. There were a number of reasons why our conversion rate was not good, and to compensate, we spent more to get people to the website. This meant we were burning through cash because we weren't getting the return we needed. If we could get and maintain a strong conversion rate, it would make more sense investing money to attract more people to our website. We’d clearly see a return on our investment.

Today, it’s happening! In just the few months since we launched on BigCommerce our conversion rate is anywhere from 2X-4X what it was before, which is substantial. The fact that we're performing as well as we are now and we're not in a peak shopping period has been unbelievable for us. In our entire eight years in business, we have never experienced such a high level of conversion.

Here’s something just as impressive. We launched on BigCommerce in April 2020. This was at the beginning of COVID. There was some uncertainty about what was going to happen, so we made the decision to cut our marketing spend by 60% and then incrementally get back to where we were. I think it was August when we last took a look at things and even though we had spent 60% less money on marketing, we made 10% more revenue. If that doesn't speak to the value and the power of the new BigCommerce website, I don't think there's going to be a stronger metric than that.

“In just the few months since we launched on BigCommerce our conversion rate is anywhere from 2X-4X what it was before, which is substantial.”

“...even though we had spent 60% less money on marketing, we made 10% more revenue. If that doesn't speak to the value and the power of the new BigCommerce website, I don't think there's going to be a stronger metric than that.” 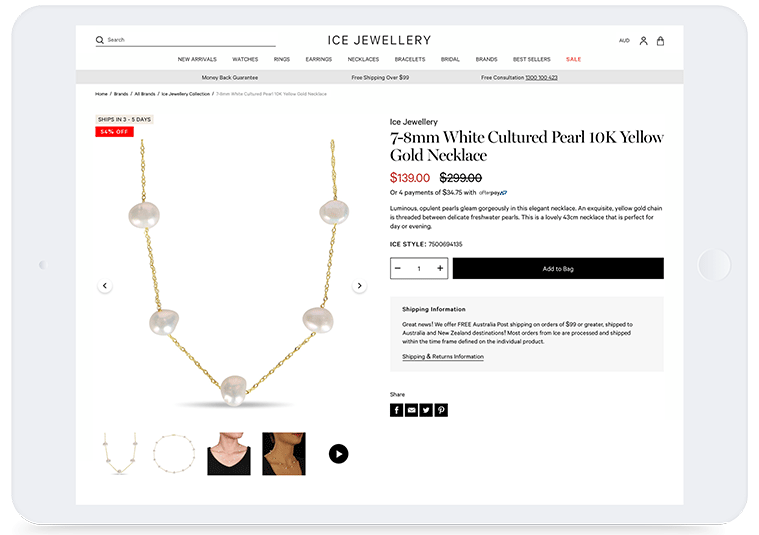 Helped by a Strong Support System

Working with Moustache Republic was unbelievable. They proved to be just like BigCommerce in that they molded to our needs and not the other way around. I expected perfection and in the end they delivered it. There was no job too big for them. If there was something we needed, they found it. If it was an “outside-of-the-box” solution, they didn’t shy away from seeing if they could build it. For example, they built us a product categorization tool.

This means that across the board, we can define rules and populate categories accurately and then BigCommerce will naturally raise those products to the top of the category. This is a big thing for us. With over 20,000 SKUs, at any point in time we may need to add another thousand SKUs. I need to know that I can add those products to the website, they will be split into their relevant categories and over time the best sellers will rise to the top of their categories. There's a lot of cogs that need to move in the right direction to achieve all this and it’s happening for us.

We use Barilliance to help personalize the shopping experience on our website. The system takes note of the pages shoppers visit and uses that information to bring up relevant items they may be interested in purchasing. Instant Search Plus is our website search tool and we use Trustpilot for reviews. The feedback helps us refine and improve our customers’ experience, but it also holds us accountable for whether or not we’re meeting their expectations.

Then, there is Albert, our digital marketing artificial intelligence tool. We supply Albert with the different creative and it will go out and test different combinations on different platforms at different times of day with different messaging to see what is most effective with our customers. It helps us avoid providing one-size-fits-all content to our customers. It’s another way we personalize the shopping experience.

“This means that across the board, we can define rules and populate categories accurately and then BigCommerce will naturally raise those products to the top of the category. This is a big thing for us.”

Meeting the Expectation of the Moment

My business philosophy, if you haven’t caught on, is focused on delivering a memorable and personalized experience. We’re professional and we deliver quality items, and even memories, that can very well last a lifetime. Think about it. A good quality piece won't tarnish. You can have it for decades and you can store a memory or an emotion into that one piece. And that's really kind of key for us.

I think it was last year when a mother ordered what may have been a $50 bracelet. It wasn't anything material, but it was for her daughter's birthday. And it was a milestone birthday. When I learned that the courier wouldn’t be able to deliver it on time, I jumped in my car and drove the two hours to drop it off to her. It's things like that where the customer realizes the extent that you're prepared to go to fulfill a promise. I consider every order a promise, and it’s really important that we don’t break our promise to our customers.